We practiced in the light of Chandra, a moon-practice like Chandra Namaskar, the salutation of the moon. The syllable "tha" of the word Hatha Yoga (more physical oriented Yoga) represents the moon and the femine energy, one of the main energies in our body. d you know that the atomic weight of silver is 108? In astrology, the metal silver is said to represent the moon.Di
Time to shed light on the multi dimesional meaning of the number 108. For example Hindu and Buddhist prayer beads (malas) have 108 beads, or some fraction of that number. 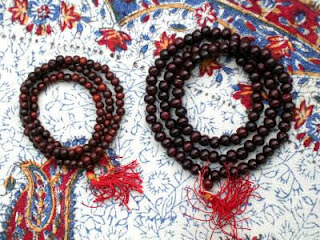 1) SANSKRIT: There are 54 letters in the Sanskrit alphabet. Each has masculine and feminine, shiva and shakti. 54 times 2 is 108.

3) CHAKRAS: The chakras are the intersections of energy lines, and there are said to be a total of 108 energy lines converging to form the heart chakra. One of them, sushumna leads to the crown chakra, and is said to be the path to Self-realization.

6) MOON and EARTH: The average distance of the Moon from the Earth is 108 times the diameter of the Moon.

7) GODESS NAMES: There are said to be 108 Indian goddess names.

9) SOUL: According to Atman, the human soul or center goes through 108 stages on the journey.

10) PYTHAGORAS: In Pythagorean, the nine is the limit of all numbers, all others existing and coming from the same. ie: 0 to 9 is all one needs to make up an infinite amount of numbers.